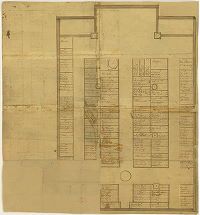 For a more in-depth look at archival holdings, microfilm copies are available at Christ Church and at the Historical Society of Pennsylvania as well as other repositories. The vestry of Christ Church serves as the governing body of the church. Its members are elected annually by the members of the Christ Church Corporation, which is comprised of all members of the Church. The vestry's earliest extant records begin in and continue through the present. All of the Church's official actions are recorded in these minutes and include references to clerical appointments, real estate transactions, bequests, financial matters and more.

Minutes from the 18th century include petitions to the Bishop of London, the directive to cross out the Prayers to the King in the Book of Common Prayer in , and the background on the formation of the Episcopal Church. The records scanned and transcribed here end in Later minutes can be researched on microfilm at Christ Church, the Historical Society of Pennsylvania or other repositories that have copies of the microfilm.

Of particular interest to genealogists are the parish registers which list baptisms, marriages and funerals. These were indexed in as part of a WPA project, enabling the Church to find records of past parishioners. Many of these listings have now been entered into a searchable database to allow users to find records of past church members. Records for baptisms and marriages performed at St. Peters can also be found amongst these records, as they formed a part of the United Churches of Christ Church and St.

Peters until For records beginning in researchers should contact St.

Peter's Church directly. Articles which you would like to post to the blog should be sent to me. See "Contribute article" in the left margin under Index.

Articles might include new research items, Moore family reunions, Moore anecdotes. As a result, he was a founding member of Christ Church, Philadelphia. John Moore died in just as the main part Phase I of the present edifice was being completed. Family lore says that John Moore was buried in the center aisle of the church.

In a search to confirm this, an answer to my query to Christ Church follows:. I am in charge of the grave yard and much research here at Christ Church. I found a listing for the burial of John Moor Esq. The only listing I found for Rebecca was in April of , probably not the same person you were looking for. As far as we know John Moor is not buried in the aisle of the church but there is no way of knowing for sure.

In the warden of the church wrote down all inscriptions at the church and 5th st. His gravestone like thousands of others faded away. He could be buried at the church or at 5th st where Ben Franklin is buried.

John Hopkins, Burial Ground Coordinator. Construction would continue on the church as it was later enlarged and the steeple tower was built.

For the next sixty-six years it was the only Episcopal church in Philadelphia. No church is more intimately connected with the founding of both the United States of America and the Protestant Episcopal Church of America.

Governors and officials of the State of Pennsylvania and the United States, worshipped here. A deed of covered most of the present site, and the first church was built of logs within a year. The design was drawn by a vestryman, Dr. John Kearsley, a physician and amateur architect, who served also on the committee for building the State House Independence Hall.

On the same committee was the architect of that building, Andrew Hamilton, who also was a vestryman of Christ Church, and the able lawyer who defended Peter Zenger to establish the principle of freedom of the press. In the building was completed, except the tower, which was added in The organ dates from and the pulpit from Among the many treasures of the church are the communion silver, which was given by Queen Anne about , and the bells.

The first bell dates from ; the peal of eight bells was brought from London, in , and placed in the tower, which had been finished the year before. Among the scores of distinguished people who were baptized at the historic baptismal font, which dates from He served as chaplain to the Continental congress, as the first Bishop of Pennsylvania, and as the Presiding Bishop of the Protestant Episcopal Church of America, from until his death in , when he was buried before the chancel rail.

He was the prime mover in organizing the Episcopal Church, after the Revolution had put an end of the jurisdiction of the Church of England and the Bishop of London over the American churches. Among the many prominent people who attended services here were General Lafayette, as a guest of the Washingtons, and President John Adams, who used the same pew during his administration. On July 20, , the Continental Congress attended services in a body.